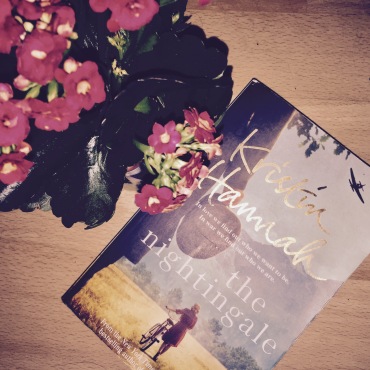 A sentence to summarise:
A historically charged novel mixed with the tenderness of human relationships and the power of human sacrifice.

Plot overview:
Spanning the course of the Second World War and the Nazi reign of terror on the people of France, this novel splits between two sisters who in different ways, become heroes in their own right by rejecting Nazi ideologies. Suffering overwhelming ordeals, whilst hanging onto -and utilising- every last morsel of inner strength , Vianne and Isabelle fight against drastic odds and risk their own lives to aid the lives of loved ones, innocent civilians and the Allied forces. Vianne, an incredibly passionate mother and wife, struggles with the emotional juggling act of: the torturous unknown whereabouts of her soldier husband; maintaining her motivation to hide her exhaustion from her daughter and to cope with the complex relationships she is forced to create with Nazi officials that occupy her home.  Isabelle, the strong-willed and free-spirited sister, evolves as the story persists: she evolves as the novel evolves. She begins as an untamed young girl who we see mature in many ways as the intensity of the novel carries us forward in time. Although many miles away from the trenches, the two sisters fight their own battles amongst the threat of the Nazi occupation. They highlight the power and heroism in those who remained at home and the incredulous strength they had. They represent all of the war angels whose lights could be seen, even in the darkest and most hostile of times.

“But love has to be stronger than hate, or there is no future for us.”

Favourite Characters:
Vianne and Isabelle.
Although the obvious answer, it is without question, that the two heroines of the story resonate as not only my favourite characters, but as two of the most courageous characters I have come across. Isabelle and Vianne- although miles apart-fight battles filled with sorrow and danger. The risk of putting their own lives in jeopardy is cast aside by their sheer determination to resist against the Nazi forces. Both find true human strength in a world that has become riddled with inhuman ideologies. Based on a true story, it pays homage to those who found themselves in similar circumstances to Vianne and Isabelle.

Wolfgang Beck :
While this character is not a favourite character of mine, I find myself needing to insert a snippet of recognition to this man. Hannah writes the character of Beck incredibly well. A Nazi soldier sent to occupy a small French town, arrives at Vianne’s door. Once she lets him inside, she lets him into her life- although only slightly, we see a true human connection between those who were cast on opposing sides by the puppeteers of war. We see a normal German man whose life has also been turned upside down by his life as a Nazi. Vianne acknowledges his sadness over missing his home life and his compassion over her and her beloved daughter Sophie. I find this character representation poignant in the fact that it highlights the internal sufferings of even German soldiers who were caught up “doing the right thing for their country” in the hands of war.

Why you should read this:
This novel evokes emotion around every corner. You feel heartache, awe and a completely undeniable respect for the protagonists. Over every page turn, there appears a new moment to utterly astound you and that only comes through incredible writing. If you enjoy historically based novels, combined with the depths of love for another soul alongside the determination of the human character, then this novel is one that should be bought, read and kept with pride on your bookshelf.

BOOK DETAILS (of the copy I read) :
‘The Nightingale’ by Kristin Hannah, Published by Pan Books 2015, London